Job Boards Are Less Effective for IT and Technology Related Jobs 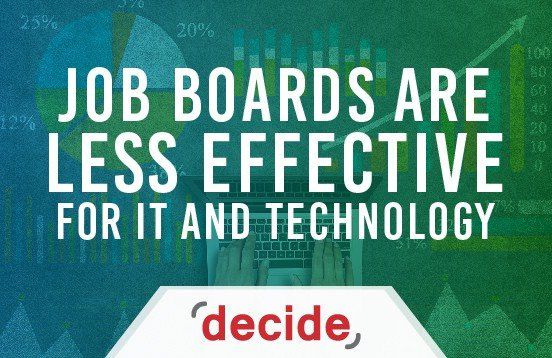 There was a time when job boards were all the rage for job seekers. All you had to do was to post your résumé on a job board and wait for employers and recruiters to view it. You could also easily apply for a job opening you were interested in. But today, finding jobs is a completely different ball game. The time has drastically changed.
Job boards lost their effectiveness once social media took the world by storm. LinkedIn, Facebook, and Twitter is what job seekers prefer to use these days to network their way to the relevant contacts. If you take the statistics into account, you will see that the effectiveness rate for job boards is only 2 to 4 percent, whereas social media platforms enjoy more than 50 percent effectiveness rate.
Just take a brief moment and think as a hiring manager of a company. Would you rather decide in favor of interviewing a candidate you don’t know at all except for what has been mentioned on his or résumé, or someone who has been recommended or referred to you? No one can argue with the fact that referrals are indeed safe and relying on résumés of unknown candidates involves more risk. That’s the reason why social networks have a higher rate of success than job boards when it comes to finding a job.
Strange as it may seem, famous job boards, like Dice.com and Monster.com, are considered far less effective for hiring tech talent. It turns out the conventional job board model has several flaws. So let’s see what has rendered job boards obsolete in the contemporary world.

Come to think of it, besides the similarity of offering a platform to look for a position, job boards and social media platforms have no other common feature. The fact that job boards have no social draw like LinkedIn acts as a deterrent to finding suitable positions via job boards. The social aspect of LinkedIn is what has made it so widely popular among the mainstream. LinkedIn is customized for both employers and job seekers to discover and connect with each other based on the skill set they have in common. It allows employers and talented job seekers to reach out to each other in any part of the world and connect. This socializing provides better chances of getting employed.

When companies post a job, it gets them on several email lists. This is a tactic employed by various unscrupulous recruiters as the base for their email campaigns. They post a job and it’s not too late before they start receiving 10 to 15 emails every week by a “bench” of H1B candidates who have typically been in the country for less than a year. Now, there is a reason why many of these candidates are “on the bench” instead of being “on a project”. So you can see why good SMBs and company executives refrain from posting a job on job boards these days. Given that IT and tech industry is swarming with H1B candidates looking for jobs, companies know the kind of responses they will get.

If you are a quality tech candidate, you will never have to go to a job board to post your résumé. The rate of unemployment in IT and tech industry is around 1.4 percent. This 1.4 percent comprises candidates who are either not very talented or qualified. Other than this, there is no reason why tech talent is unemployed these days. The demand for tech candidates is increasing with each passing day as more and more software companies and SMBs have come to realize that they need tech and IT talent in order to generate new revenue streams. In fact, these are the best days for tech talent out there as thousands of IT and tech companies are looking for top tech candidates and offering them amazing salaries. Tech talent today doesn’t have to look for jobs, jobs are looking for them.

It’s a little surprising, but yes, job boards are expensive. If companies decide to post a job on a job board, it would cost the company around $375. Not that this amount will make the company go bankrupt, but it just makes them post a job and pray that someone worthy of this position replies on time. Subscriptions for posting multiple jobs with résumé searching cost around $10,000 per year. There are surely better expenses with greater ROIs that a company can consider instead of incurring this expense.

You can ask modern hiring managers working in reputable companies if they use job boards anymore. They’ll tell you they have them but  ever use them less frequently. They find who they are looking for elsewhere. There are plenty of reasons as to why companies don’t rely on job boards as much. Many times the job posted on a job board remains confined to the existing employees of the company and doesn’t reach out to the millions looking for a job. Thus, when no fresh and advanced talent enters a company, its growth becomes stagnant.
While the use of job boards is certainly diminishing with time, it isn’t dead yet. There are companies that rely on both job boards and social media platforms. Hiring managers of many SMBs post job board ads on company social media pages to maximize exposure, or they include social media links in job board ads, allowing candidates to connect with recruiters online.
But in IT and tech industry where the demand is for top tech talent, job boards fail to turn in the kind of candidates advanced software and IT companies expect to employ. Renowned job boards, like Dice, Monster, CareerBuilder, are not going to disappear tomorrow, this year, or next. Thus, it’s better if they realize the need to evolve from the .com mentality. They should understand that it takes cutting-edge technology to hire cutting-edge talent. Now, how can job boards, an idea that came out in the ‘90s, be considered something close to being cutting-edge?
Are you finding it harder to locate the good technical and IT talent? Many companies find them selves in the same situation. There are some better ways to locate and attract the right it and technical people to your company. Contact us to learn more.
By Decide Consulting|June 27th, 2018|Better IT Hiring, IT Recruiting, IT Staffing|0 Comments