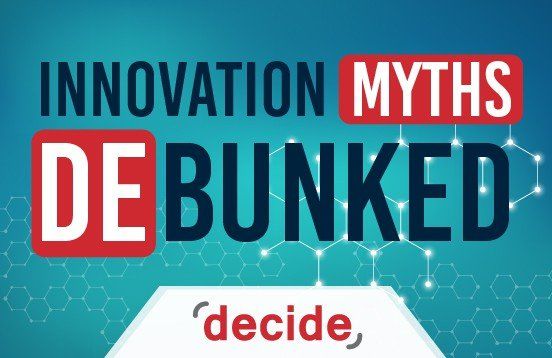 You can find plenty of research that supports the idea that companies need to innovate to keep growing and perhaps even to survive. You probably already know the story of how Blockbuster Video missed an opportunity and let Netflix disrupt the industry. The importance of innovation runs even deeper than a force for business growth. Scientific American talked about innovation as one human virtue that allowed our ancestors to advance from pretty feeble, hairless apes to the planet’s dominant species. People found solutions to problems like fierce enemies, bad weather, and scarce resources in order to survive and thrive.

When you think of innovation as a term for the various ways that people succeed by solving problems, the process should become easier to understand.

That phrase may only be true when used in a Keven Costner movie about a baseball field in Iowa. Sadly, many app builders, website developers, and writers find that even good work practically never sells itself. At the same time, even with great marketing, products and services that don’t offer people value aren’t likely to engage a lot of customers. Growth relies upon value, a competitive advantage, and a good marketing plan. Your company has to do good work and let people know about it.

Whatever happened to Google Glass? These headsets allowed wearers to access the internet and use apps, but they mostly looked like a regular pair of glasses. Unlike using mobile phones for similar tasks, these glasses freed up hands for other tasks. While mobile phone sales are still booming, few people talk about Google Glass these days.

Even though some folks are still using the handy devices, like the AGCO factories NPR profiled, consumers mostly just weren’t ready for them yet. Some analysts say there were too many concerns about the reaction of companions without devices, privacy, and distraction. They speculate that a new generation may be more receptive to these kinds of wearable devices. Sometimes, timing and understanding consumers is everything.

People tend to think that great ideas come from one moment of inspiration. Still, the quote by Edison about genius consisting of 99-percent perspiration and one-percent inspiration probably describes most innovation. If you look into the history of most overnight successes, you’ll probably find years of preparation and persistence in their background. The Colonel was already collecting social security when he marketed his chicken. Good ideas are actually not that rare, but good follow-through is.

Innovation doesn’t require a lab; successful innovation only requires an acceptable solution to a problem. Perry Spencer invented the microwave oven after he accidentally melted a chocolate bar in his pocket when fiddling with devices to improve radar arrays. Well, that may have actually happened in a lab, but it’s still a story of an accidental inspiration.

In the early 1900s, an eleven-year old boy accidentally left a wooden stirring stick outside on a freezing night in a bowl with soda powder and water. The next morning, he tasted his new creation by using the mixing stick as a handle for the frozen treat. Later, he marketed his invention as Pop’s Sicles, and without that, we may have never enjoyed popsicles. The moral of that story is that innovation can happen anywhere.

Sure, you can cite Windows computers and iPhones as examples of big ideas that led to innovation on a massive scale. You’ve probably heard of the term minimum viable product, or MVP, to refer to the simplest version of a product that can be marketed. Well, you can extend that concept to the idea of a minimum viable innovation as well.

Harvard Business Review discussed the fact that many companies overlook small but beneficial improvements because they focus so much on producing the next big idea. You may find that consumers are pretty satisfied with the current tech of their mobile phone, but they’d like a battery that lasted longer, a better voice app, or even one of those selfie sticks.

The HBR article emphasized the value of practicing innovation on a small and local scale. Even minor improvements in accounting processes, security, or product designs may pay for themselves many times over. Since innovations don’t always succeed, companies can also focus upon taking smaller steps in order to manage risks better. While a few geniuses may go down in history for their innovative solutions to problems, humanity as a whole has probably benefited just as much from many small improvements that had the benefit of careful testing and mass acceptance.