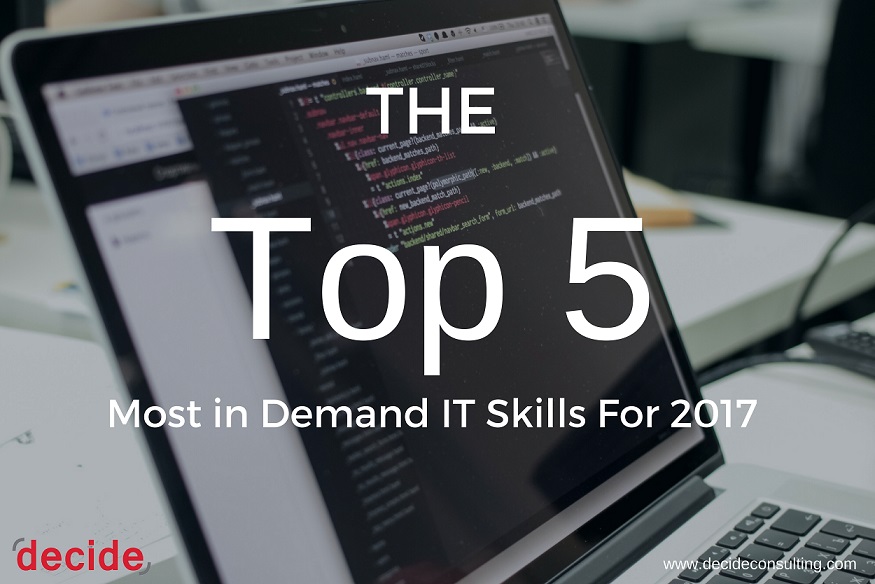 The IT labor market is still very hot, with the candidate in the driver’s seat. Unemployment rates are at historic lows and, if you’re a manager looking to hire employees with the most in demand skill set, you’re in for a challenging and competitive process.

A recent survey from Robert Half Technology showed that the majority of CIOs will either expand their IT teams or focus on filling out vacant roles. Another major report indicated that industry confidence is high and IT budgets are rebounding, according to a CIO article.

While it’s a positive outlook for the industry, you’ll be better prepared to strategically staff your organization if you know where the most competition lies.

We’ve seen high demand for .NET full stack developers thus far in 2017. Many companies are searching for full stack web developers who are “comfortable working with both front-end web technologies and back-end databases, as well as any middleware code in between,” Guatam Agrawal, senior director of product management at Sencha told TechRepublic in a recent article.

Here are the popular tools and technologies for full stack web developers:

According to a recent analysis of 2017 hiring trends published by Stack Overflow ranked ReactJS as one of the top three fastest growing skills in demand. As more people have started to complain about problems with the massively popular AngularJS framework at the end of 2014, React started gaining traction. Recently established tech companies such as Netflix, Dropbox and Yahoo! Have also adopted React into their tech stack, which gives React a “vote of confidence”, according to Code Mentor.

2017 may be the year of the Xamarin developer, as the cross-platform development software that aims to simplify mobile application creation has an ever growing community of over 1.4 million developers.

With Xamarin, you can code for iOS and Android mobile platforms in a single technology stack. Because 96% of the source code can be reused, it results and a significantly faster engineering cycle. If your company plans on building a mobile app in Xamarin in 2017, the battle for Xamarin/C# talent is likely to be hard fought without sufficient support.

CMS has gained popularity in recent years because it allows website owners, marketing departments and others to update data without having to deal with the challenge of coding a website. Examples of CMS include WordPress, Craft, Drupal Magento, with the primary coding language being PHP. As more enterprises embrace web based services and continue to grow their digital footprints, there demand for CMS developers will only continue to grow.

Responsible for implementing visual elements that users see and interact with within a web application, front-end developers have a very bright future when you account for the startup ecosystem that is continuously growing and the growing established companies that are also hiring the best talent for furnishing their online products.

Front end developers have the UI/UX design skills coupled with the right technology to turn their vision into a reality. Graduates from Art Institutes who understand HTML5, CSS and javascript libraries are the best profiles.

Expanding Your Team with the Right Talent

Good developers are a relatively limited resources. Additionally, they can be a challenge to attract, as some command high salaries and may be juggling multiple offers from different companies. The investment into get just one good developer can be a tedious process, and while many developers may seem to have the right skills on the surface, a rigorous screening process is needed to truly to determine their level of skill.

If you’re organization, startup or company is in need of a new contract, project-based or long-term IT hire that is both skilled and the right fit, get in touch with the recruiters at Decide Consulting. Our extensive network of connections, proven process and highly focused screening process allow us to identify and attract the finest talent for you.

To learn more, visit our core values and services pages, including Environmental Health and Safety Software, Healthcare IT Consulting, IT Staffing.

By Decide Consulting|August 22nd, 2017|Featured, IT Recruiting, IT Staffing|0 Comments