5 Jobs That Will Be Created by Automation 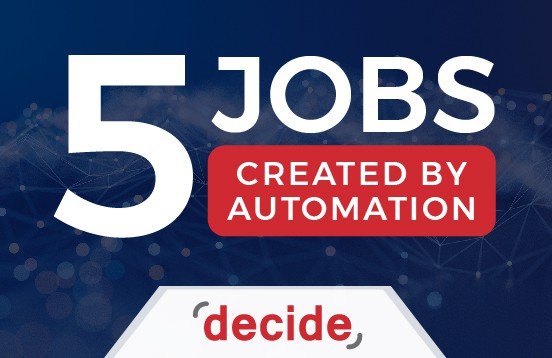 Are you worried that a robot or AI system will replace you at work? If so, you should probably relax and even look forward to an exciting future. Automation may have replaced 800,000 jobs, according to one study. At the same time, automation generated about 3.5 million different jobs, and mostly, these jobs pay considerably more than the ones that were lost.

Take a look at some new opportunities that automation created or is likely to create soon:

Automation helps create service jobs in a number of ways. For instance, Paneera Bread has enjoyed great success with its new AI ordering and delivery system. Customers can order salads, sandwiches, and soups for delivery to their homes or offices.

All of these new orders need drivers to deliver them, and Paneera has ramped up hiring with a promise of good wages and hours for delivery people. Amazon has also famously begun to explore local delivery services for groceries and other products.

Google’s driverless cars have already navigated one million miles and demonstrated much better records than human drivers. Google and other companies invested in this technology say that they’re ready for prime time and just need to gain acceptance for the idea. Other auto makers have already put automation-assisted devices in vehicles to help improve safety and handling.

Except for companies approved to test driverless vehicles, they aren’t legal yet; however, some people believe they will begin to navigate the city streets and highways within a decade. When that day comes, the transportation industry will have plenty of opportunities to take advantage of. Indeed, regulatory bodies may also employ street and highway controllers that function like aircraft controllers do now.

Have you ever dreamed of visiting the Emperors’ Resort in Kyoto Japan or taking a photo safari on the African savannah? You may have a long bucket list of places that you’d like to go. Right now, financial or personal obligations may prevent you from booking the trip. Still, you can already experience the next-best thing via Virtual Reality (VR) vacations.

Tech and hospitality companies and even museums have begun a new sort of transportation industry in the form of digital vacations that you can take by simply using virtual reality devices. Typically, these use live or recorded 360-degree views of vacation destinations, and plenty of people will be needed onsite to serve as virtual vacation planners and tour guides.

Banking and many other industries are investing a lot of money into AI for the purposes of improving their online chatbots. These AI bots actually get better at their jobs as time passes by collecting information online and from human users. This kind of automation can help improve customer service because people can access them conveniently 24/7 and without waiting on hold to speak with a live representative.

They won’t eliminate human customer service agents, but they can help consumers by allowing them to quickly decide if they need to wait to speak with a person or can get their questions answered digitally. As the race to create better chatbots ensues, many industries need developers, designers, testers, and people to provide input.

Automation hasn’t reached that tipping point where automated devices and software can just create themselves. There has been a lot of talk about the crushing demand for good AI developers. Even today, businesses need AI developers to work on everything from self-driving cars to devices like Amazon Echo that consumers use in their homes to query or shop with.

At the same time, even qualified AI testers have been in short supply. Sometimes even the testing of automation is automated; however, companies still need skilled people to use the testing software and create the tests. Besides developers and testers, companies will need good designers, creative people to imagine new uses for AI, and of course, experienced managers.

Getting Replaced by Software Can Help Your Career

A company called Boxed replaced 100 warehouse workers in one New Jersey facility. The company did not fire these workers. Instead, they retrained and promoted every single one of them. A few of the workers remained behind to use the company’s new automated fulfillment systems and train other people how to use them. Others moved into customer service. The company did cut costs with automation. At the same time, average replaced workers enjoyed raises of 13 percent.

If a robot comes along to replace your job, you have a good chance to get a better one.