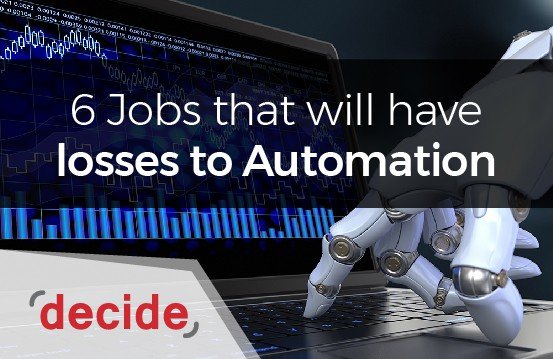 While the robots aren’t exactly coming to take all our jobs just yet, automation will have an impact on a variety of fields in the next decade and beyond. While most professions will experience changes due to automation, the fields below are particularly at risk and could even be eliminated by automation.

From improving safety with a self-driving truck to increasing efficiency and accuracy with automation in the warehouse and on the production line, these are the jobs that are most likely to be impacted by automation in the years ahead:

While the self-driving family car is often promoted as the wave of the future, autonomous vehicles are already hitting the highways for businesses and brands. From self-driving Uber cars to big rigs that are increasingly powered by automation, autonomous vehicles are becoming more of a reality every year. In trucking, automation is already being used to improve safety, and many of the issues that make trucks dangerous can be resolved by removing the human factor. An autonomous vehicle does not get tired, take drugs or break the speed limit to get to a destination faster – but a human can, with tragic consequences. The reduction of risk without loss of efficiency makes trucking an ideal target for automation on a broad scale and puts millions of jobs at risk.

Perhaps the most commonly understood profession that is at risk from automation is manufacturing. Across the world, automation replaces human workers, improving consistency, quickly, efficiency and productivity in many cases. Humans are already being replaced with automated machines and robotics; manufacturer Foxconn recently replaced over 50,000 human workers with robots to create Xboxes, iPhones and more.

If you’ve been inside a quick serve or fast food restaurant recently, you may already be aware of this phenomenon. Customers can place orders via an automated in-store system o even with their own mobile devices. In the back of the house, automated drink stations prepare beverages based on the orders received and have them ready for the remaining human employees to fill.

One of the industries most impacted by automation is retail. Already, automated kiosks replace human cashiers in a variety of settings. Vending machines distribute not only candy and snacks, but intake second hand technology, sell hot, prepared food and even handle returns for stores and businesses.

While stores will still be staffed by humans, some tasks are ideal for automation; anything involving automation in the checkout line or order fulfillment is likely to replace human workers. The largest area of loss in retail will be cashiers, according to Money Magazine. Simply replacing human cashiers with automated, self-serve checkout areas will eliminate millions of retail jobs over the next decade.

Automation is also expected to have an impact on the way consumers purchase goods. Instead of hunting down a salesperson, a store visitor could simply look up an item on a mobile device or in-store tablet and instantly access the information they need.

Automation in mining uses predictive technology and machine learning to do the job performed in the past by a dowser or other specialist. Other technology replaced the humble water stick or “best guess”, but the outcome is the same – knowing where to look for the items you are seeking. Technology also helps with tasks that could be too dangerous for human workers and to perform predictive analysis and risk assessment. Automation helps reduce risk and improve success, making it an ideal match for the high stakes involved with mining.

They don’t get sick, transpose numbers or load 18 items when the order calls for 16. Using automation in the warehouse improves logistics and ensures that not only are orders filled correctly, but that inventory is tracked and reordered as often as needed. Replacing some warehouse staff with automation can help improve success, particularly for organizations with many redundant tasks or similar types of orders.

If you are currently in one of these fields, now is the time to start deciding your next move. Fortunately, automating is creating as many jobs as it is eliminating so in some cases, simply transferring your skill set to a different organization or field is all that is needed to move forward. Job loss due to technology is not new – people have survived this in the past. According to the Bureau of Labor Statistics, in 1950 there were 2 million jobs involving manual typewriters, from secretarial work to stenography; these now obsolete jobs have been replaced by millions of computer related professions. The losses to automation will likely follow the same path, so there is nothing to fear from technology and change.