Why is Python the Top Choice for Data Scientists 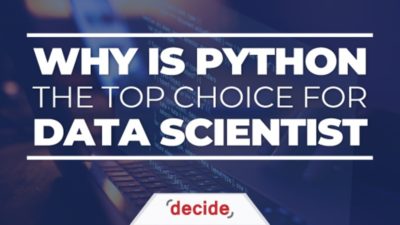 Both Python and R are popular programming languages among data scientists. Naturally, there is also plenty of debate regarding which language works better for data analysis. Python is generally more common than R, and for a good reason. The programming language offers various advantages that make it superior to R. Read on as we discuss the use of Python vs. R for data science and why each is used.

Perhaps the most notable application of Python that also testifies its superiority is that Google uses it for its machine learning framework. Google’s TensorFlow is an open-source library. It is used for large-scale machine learning and numerical computation. TensorFlow uses Python for providing an efficient front-end API that can be used to build applications with TensorFlow. It also executes these applications in C++.

Another reason why Python is a winner in the Python vs. R for data science debate is that it is much easier to learn. The language is taught in middle school and high school. It is a beginners’ programming language, and you will find it much easier to write programs in it. Python is also similar to English, which is why young programmers are able to learn it quickly. Moreover, it is easier for application developers to read and remember Python syntaxes compared to other programming languages.

Python is also a better choice for data scientists because there are many open source libraries available for it. Its simplicity attracts developers to create new libraries that can offer support to other developers. Some of the most popular Python-based libraries include StatsModels, NumPy, SciPy, Pandas, and Scikit-Learn.

The most commonly used programming tasks have already been scripted in these libraries and can be used by new developers. This helps save time and limits the amount of coding that needs to be done in Python.

As a data scientist, having a wide network of resources can be incredibly helpful. You can collaborate with other people to improve your work and benefit accordingly. Of course, the number of people who specialize in your niche is very important here. Fortunately, this isn’t a problem for Python users. Given the language’s simplicity and widespread usage, there are thousands of Python forums available that data scientists can use.

You will also find forums for R, but Python has a significantly larger community. For instance, let’s take the example of StackOverFlow. It features 375,000 questions related to R. In comparison, there are 1.6 million questions for Python! Given the high frequency of questions about Python, you’ll find it much easier to find an answer to your queries about this language. Odds are, whatever you need an answer for has already been asked by another user on the forum.

A simple way to determine which programming language is better is to review the number of jobs available for it. The job market reflects which skills and qualifications are most popular and in demand. In this case, there are more jobs for Python developers than R developers. Considering Python’s versatility and its use in developing applications, this is a given.

In comparison, R developers lower staring salary. The number of open positions for R developers is considerably less, as well. In Houston, for every 50 jobs listed as “Python Developer”, there will be one “R Developer” posting.

If you are wondering about using Python vs. R for data science, then we recommend choosing Python. The programming language offers a series of advantages that are not available if you use R.

To do a quick recap, Python is easy to learn and use. You can access multiple open-source libraries while writing code in Python and get the job more quickly. You can also reach out to other Python developers and get an answer to your questions quickly. Finally, the current job market favors Python developers because of its widespread implementation. Therefore, knowing how to code in this programming language offers you a distinct advantage.