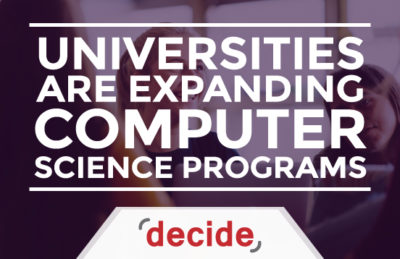 A career in IT is one of the most lucrative fields of work for a fresh graduate. In fact, the IT industry is a fruitful and high-income enterprise for both the employer and the employee. With almost every business going digital, today the IT sector is a booming field that houses exceptionally talented Computer Science Engineers and programmers.

However, despite a visible increase, many still lament that the number of graduates is not enough to meet the demands of the IT industry. According to a recent research, by the end of 2018, around 2.4 million STEM-related jobs were predicted to go unfilled.   In information technology alone, there are over 500,000 unfilled jobs.

The demand for computer science graduates is clearly rising. Recent statistics show that in the next decade, over half a million ICT jobs will be further created. And, by 2024, around three-quarters of STEM job growth will be in computer-related professions.

Certainly, universities are expanding and enriching their Computer Science programs to meet the growing demands of the IT industry. However, there is still a worrying flurry amongst hiring IT managers concerning the lack of computer science graduates.

If your company can relate to this burgeoning issue, then here are some convincing proofs to restore some hope. Yes, there is a recruitment gap in the IT sector, but universities are gradually expanding their programs to meet the demands of today. Let’s have a look at some of these pro-active efforts.

Naturally, when the number of students was less, there weren’t as many research and technological programs to cater to the IT industry. However, now the institution is making special efforts. An expansion that is known as “CS with impact” has been launched to bolster Computer Science teaching and research.

It entails major expansions in Computer Science in the next five years, with an addition of 10 tenure track faculty positions that will have special Computer Science research and teaching responsibilities. 15 new lecturers and professors have also been registered for the Computer Science faculty along with greater support for high-impact research.

The Brown Department of Computer Science is an established sector for Computer Science students. Having pioneered and supported research for object-oriented programming languages, computer graphics, and databases, Brown alumni have a record holding up jobs at Microsoft, Google, and Intel. Many also have had the opportunity to chair at Computer Science departments of the University of Washington and MIT.

These tenure-track hires will be responsible for enhancing emerging departments in areas of artificial intelligence, computer education research, and visual computing. They also plan to introduce Computer Science tools into other fields of study like visual arts, health, and economics to expand its scope.

The Center for Computational Molecular Biology comprises computer engineers who are trying to make sense of the genetics of evolutionary biology and human disease. The university also has a Data Science Initiative, where researchers are constructing tools to study and analyze humongous databases. The main aim behind this initiative is to eliminate false discoveries linked with big data.

Clearly, Brown university is making serious efforts to expand research into Computer Science education for social impact. The faculty is being trained to prepare students for computational tools that will solve the “problems of the 21st Century”.

2.    Computer Science Grads in the US Are Outperforming Those in Other Countries

The US produced around 65,000 students with a Computer Science degree, and we’re certain that the numbers are going to rise higher. Even when there are more Computer Science graduates in China (185,000), research shows that US computer science students are far more well-prepared.

Gender representation in Computer Science has also increased from 20.78% to 22.09%. Even when the increase is small, it is nonetheless positive news for IT recruiters. The K-12 Computer Science enrollment has practically sky-rocketed, with the AP Computer Science program being one of the most popular courses amongst the youth. The number of female test-takers went up by 25%, while the number of minorities increased by 38%.

Students actually like learning Computer Science courses related to big data, artificial intelligence, and video gaming. So, one way or the other, recruiters are going to see many enthusiastic young people turning up for interviews. Around 70% of students in Code.org who studied Computer Science in high school express interest in specializing in it after graduation.

The time isn’t far when Computer Science students will soon beat other careers. With ready access to hoards of data and yet more to create meaningful value of, there is a dire need for data scientists and computer engineers. Universities are certainly preparing their students for the innovative demands of the IT industry!