5 Problems That IoT has to Solve (and will) 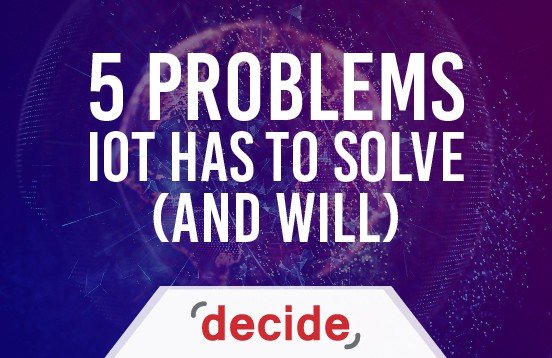 We have been talking about the use of the Internet of Things (IoT) in the world for a long time, but amidst all the hype and the excitement, many of us failed to recognize the implications that will come along with this unprecedented technology. IoT has indeed created a wave of excitement all across the globe, because of all that it promises in the future, however, we cannot factor out the presence of the implications that may pose a threat to the widespread use of IoT.

Here we mention 5 of the implications that come across as hindrances to the growth in the use of IoT. People have started using IoT inside their homes, and we now have a huge number of devices connected to the internet. What this means is that there is greater responsibility on the stakeholders managing the future of IoT; responsibility to ensure that the safety and security of data is ensured, and every person gets what they want from the technology.

The number of devices connected to IoT is ever increasing and according to a reliable source there were more than 18 Billion IoT devices at the end of 2017. This number has come up a long way during the last couple of years, and all these devices connected to the system may soon pose a security issue in the future.

The number of devices that we have connected is ever increasing and stats suggest that by the end of 2025, the number of devices connected to IoT will cross the 70 billion mark. Now, these 70 billion devices come with a security risk of their own. Not only do they need to be treated like a USB drive or a computer, but one should also make sure that they come from a reliable source that is trustable.

The need for more security looms as a hindrance over the connected IoT devices. How safe is the system? Can any device connect to it? How secure are you from outside intrusions? These are some of the questions that we hope will be answered in the future, before the high number of connected devices creates a mess that is too widespread to be cleared.

The amount of data that can be expected with the rise of IoT in the future is something that makes us excited, but skeptical as well. There is going to be a huge influx of big data coming in, and how the concerned authorities manage this predicament is what will define the future course of action.

The data that we are talking about here constitutes the trends and patterns that will be coming from around 80B connected IoT devices in the future. This data will be stored in the cloud platforms for sure, but how it is secured from external data attacks is something that will define the trust people show in this technology going down the line. Securing the devices connected to the IoT servers is one thing, and securing the data that we’re getting out of it is another. As important as it is to secure the devices from intrusions and other external attacks, the data on the cloud also needs to be given the attention required, and preparations need to be done to gear up for this huge inflow of data.

These bot attacks may have a widespread impact once they are carried out on an IoT device of a public nature. For example, imagine the impact that these bot attacks could have on IoT medical devices that call for an ambulance. A single bot attack could lead to widespread havoc, including false alarms and other implications.

While people out there have a hard time trusting Siri, asking them to put their confidence on an IoT device could be a big stretch. We will be putting a lot of trust on our IoT devices going into the future. Along with the devices, consumers will also be required to trust the networks, software and data centers that come along with it. With the current consumer becoming ever so cautious of the devices they use and the data they give, it is imperative that IoT stakeholders instill the required confidence in the people.

Find the Tech Talent to build it all

There is seriously a tech talent shortage out there. Managing the70B IoT devices and storing the data that comes from these devices requires a lot of expertise. What we need here is for tech talent to come up and provide the human element needed to work along with the brilliance of IoT. The human element is also necessary for reaching out to other humans for building the much needed confidence in them. So, it is high time that well-trained tech talent comes by to fulfill the growing needs in the market.

The use of IoT is soon expected to grow all over the globe. With these expectations and the anticipation around it, the technology can surely benefit by reducing the implications surrounding it over the course of the near future.