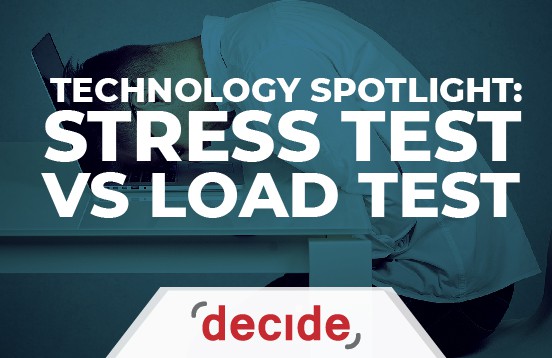 Working in software development requires conducting a stress test and a load test during the software development life cycle. Whether you’re in DevOps, a Quality Assurance Engineer or a basic Software Engineer, you need to do load and stress tests in order to estimate how much a system can bear before it breaks down and how well it performs under certain loads and peak times.

What Are Stress and Load Tests?

A stress test involves overloading a system to its breaking point to find out how much it can take. This can help determine the capacity of that system and identify the variables that can help the current system to be redesigned to exceed its limits.

A load test involves observing a system under a predetermined load. This includes measuring its efficiency, the heat it generates and the performance it keeps up for a stretch of time. This can also help identify factors that can incrementally improve that system.

The two tests are not completely independent from each other. They can overlap. In conducting a load test for a system, sometimes the tester can exceed the limits of the system and end up finding out its breaking point. Just think of it this way; each stress test is a load test, yet not every load test is a stress test.

Choosing Which Test To Do

There are specific circumstances when you want to do either test.

A load test can be designed by the tester to work under very specific conditions. For example, a test that measures a system’s gradual performance degradation can also test whether it recovers if the load is relaxed for a predetermined amount of time.

A stress test is, by definition, done to analyze how many simultaneous user requests the system can handle at once. Any pauses, relaxations and load removals results in the data being contaminated.

These tests can include a measure of the average Wi-Fi connection speed for your ISP, average time needed to download a file, average latency etc, average clock speed for a graphics processor, average refresh rate for a workstation monitor etc.

This is the most common type of stress test. It involves pushing a system to the limit of its capacity. This could measure how fast a graphics card can render a 4K video, how buttery smooth a gaming PC can run a graphics intensive game such as Horizon: Zero Dawn etc.

Mathematicians also routinely perform these tests with supercomputers that are used to calculate impossibly large numbers. For instance, computers are used to find larger and larger prime numbers each year. These get increasingly hard to compute due to the definition of a prime number, which is a number that is indivisible by any number but 1 and itself.

As the world becomes increasingly mobile and Internet-based, more and more applications are shifting towards the web. These applications do not require any storage on the home computer, but require enough memory and graphics processing power to run the programs from cloud servers thousands of miles away.

It is imperative that these applications can run on the lowest end PCs possible in order to be available to the largest market share. Stress tests and load tests are necessary to find out if this can be done.

The cloud servers are also tested to see if they can handle the user traffic. This is why gaming platforms such as Xbox Gold and the PlayStation Network and popular games like Fortnite and PUBG, face blackouts and breakdowns. The traffic simply becomes too much to handle for the servers.

Load tests can be performed to measure the capacity of a certain system and to observe if it can bear a heavier load in the future. As long as the system, software or application is able to respond to the user requests within the Service Level Agreement (SLA) parameters, the test is considered a success. However, if the metrics recorded are outside the stress parameters, the test may become a stress test.

Testing to identify at what point your infrastructure can come to a screeching halt is a great idea. This can involve shifting all the web traffic at a certain point in time to a single geographical region. This allows you to see how strong the servers in certain areas are. That way if you need to relieve pressure in certain regions and lay off requests to another, you can do so, knowing when your system is meant to fail.

There are other ways of testing infrastructure including downloading a particularly large image or video file, limiting the maximum number of data connections and artificially limiting the available disk space in the region.

Load tests and Stress Tests should be carried out at all systems to ensure a smaller rate of failure and a greater rate of optimization.