Top Qualities of an Effective IT Leader 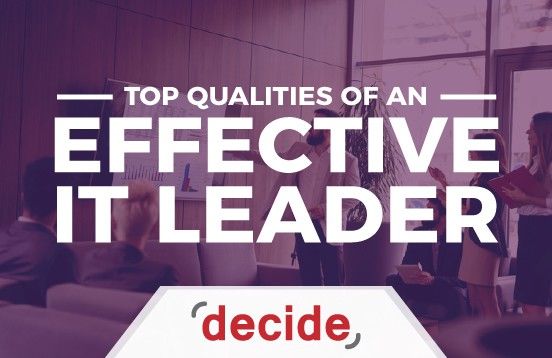 Information technology and software development requires incredible creativity and vision. A leader in Information Technology has to really push for excellence and value in their products to make sure that they make a mark on the world. This article digs into some common characteristics we see in strong IT leaders.

An IT leader needs to have a clear vision in order to lead his or her company in to the future. That cannot be compromised because tech is a field that is more concrete and less abstract than other fields like social sciences. Hence, the vision that the leader has, has to be one that everyone on the team can identify with and see clearly. If it doesn’t register with key team members, then there is a good chance that plans will fall through.

For an IT leader to succeed, he or she needs to have a great deal of transparency with the employees. That isn’t a suggestion; it’s a necessity because there needs to be clear input from both sides of the fence for the product or service to come to fruition.

It’s also important to get everyone on board as quickly as possible. A great leader makes sure that there is communication and input from everyone from the very start, so that basic problems and issues with the project get sorted out early. When a project is started there are so many things to consider. One could be the addition of a certain programming parameter or the choice to code in a certain language over another. All these things should be discussed openly and quickly so that there is little disagreement going forward.

If there are issues in the team that come out later in the project, that can cause it to derail. Worse than that, it can make the leader’s job harder to control the team. Hence, a leader should communicate the vision early so that a concrete team stays together and works together so that everything flows smoothly.

Communication also needs to flow naturally throughout the process. There is a tendency in tech for companies to form committees and to leave each other working in the dark. One department works on their project and the other doesn’t butt in. However, the sign of a great leader is that he or she can get them to work in tandem and without friction.

Take Steve Jobs for example. He once said that all he had to do was to get the best A players in the business together and they’d love to work and communicate with each other. That’s what team building is, and it’s an essential part of any company.

Have Core Values and Make Decisions on them

This is not to say that there isn’t a time when compromising on values isn’t necessary. However, it is the sign of a great leader in any industry that they stick to their guns. That inspires loyalty, it inspires respect from all around the industry and it inspires a cult of personality.

There needs to be some time set aside for celebrating the successes of your career. If you’re a tech leader you need to be able to take a load off and celebrate your success. If you’ve recently won an award or crossed a certain threshold in market capitalization or surpassed a sales record, you need to celebrate. This not only shows your team that you appreciate their efforts, but that they’ve signed on for a job that involves perks like partying hard after working hard.

One of the most important things you should do as a tech leader is to delegate responsibility. It is up to a tech leader to recognize the abilities and talents in his or her team. You can’t allow a programmer to become a hardware specialist or vice versa. And you absolutely have to recognize any hidden talents in your employees that they aren’t ready to share. This is what is called delegating responsibility and it works well in any business. However, it has a special place in the world of IT because clutter and overlap in responsibility creates more problems than it solves.

IT is a particularly straightforward and dry field to work in if you’re not inspired by your work. That’s why there are catchy slogans that companies tout in front of investors and the public. However, the employees and the leader of a tech company need to believe in those slogans in order to get the best out of themselves. A great tech leader won’t just create that slogan but embody it. He or she will show their team that those words mean something. And whether it’s through speech or action, tech leaders will make sure their team performs their best.