Your Mouse is Dead. New Interfaces are Coming! 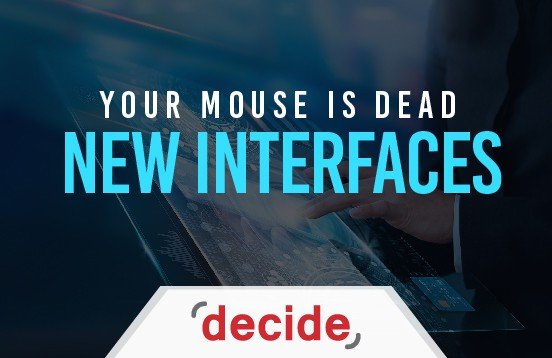 First, it was punch cards, before the next wave of technological advancement brought us the mouse and keyboard. If truth be told, the kind of systems and tools that we use for engaging with our computers are very much responsible for allowing us to build a modern world around us. When we talk about those tools and systems, we sure have come a very long way. But when we talk about UI (User Interfaces), the means we use to interact with our computer systems, it’s only now that we have started to see advancement in this department over time. New interfaces are coming to us and some of them will be very interesting. New interfaces such as Voice Command, Virtual Reality, Augmented Reality and Touch Surface are coming. The keyboard and mouse are on their way out.

What Does It Mean When We Say a Good UI?

There was a time when we were accustomed to typing and clicking to get our message across to the machines. Then came the era when we saw everyone pinching, poking, and swiping the screen left to right, and right to left. For many people, this advancement was brought into their lives by iPod. Shortly after iPods, smart-phones with touch-screens penetrated the market and took everyone’s breath away. With smart-phones came new user interface which allowed users to communicate with their devices by poking (equivalent to pressing a button), pinching (zoom a picture in and out), holding, pressing, and dragging. The reason because of which these tactile commands charmed the mainstream and became popular among the masses was the fact they were innovative. Everybody, since then, owns a touch-screen smart-phone because the finger movements across the screen feel very natural.

This is what a good UI is. In short, a good user interface allows a user to communicate and interact with devices and software more personally and in more natural ways. A similar UI revolution has already affected the ways people are interacting with their computer systems. The new and modern ways have rendered mouse and keyboards obsolete.  It’s only a matter of time that you’ll start seeing everyone using those interfaces to communicate with their personal computers like they communicate with their phones.

Keyboard and mouse have a limited lifespan. This article is all about introducing you to the new, modern, and technologically advanced user interfaces that have come into existence and some advanced IT companies have already adopted these state-of-the-art interfaces.

Voice User Interface (VUI) is the technology that allows a human user to interact and control a computer system with voice commands. VUI offers a wonderful change and it is fun when it comes to operating things, using this UI. Today’s VUIs are gradually becoming smarter by learning the patterns of human speech and developing their vocabulary. With Amazon Alexa and Apple’s Siri, VUIs are evolving fast and are destined to become the next big thing in the world of computing. In fact, Siri has been with us for quite some time now. But it’s still not modern and hi-tech enough yet, because at times, Siri doesn’t understand what you’re saying. Some other home assistants, like Alexa, are performing better, but not quite like the way Tony Stark communicates with Jarvis in Iron Man. Anyhow, all hope is not lost. If all goes well, VUIs will surely get better.

From touch displays, the technology has shifted to touch surfaces that can even turn your desk into an interface to control and operate computers. Microsoft Surface Studio is one example that is designed for an amazing creative experience. Its touch surface gives you a huge canvas for all types of work. You can stand it upright or you can lay it down on your desk and draw on it. Similarly, technology has turned the skin of your forearm into a touch surface to operate your smart-watches. By wearing a signal emitting ring on your finger, you can play games and you can use apps using your skin as a touch-screen.

Virtual Reality (VR) is a simulation of real-life environment generated by computers. The thing that impresses you the most about VR is its ability to immerse you into this computer-generated recreation and make you feel as if you’re experiencing everything for real. You can experience VR by wearing a special headset. As for Augmented Reality (AR), it is a modern technology that places computer-generated details on top of a real medium. AR is currently being used for displaying game scores on telecasted shows, including sports games. Leaders of the tech industry and IT specialists are using AR to create revolutionary things, like motion-activated commands and holograms.

Eye-tracking is a sensor technology that allows a device to detect where the subject’s eyes are focused in order to determine your attention, drowsiness, mental states, and consciousness. All this information is then used to develop meaningful insights related to consumer behavior, or for creating state-of-the-art UIs used by various devices. For instance, you can take the similar information about Stephen Hawking by tracking his eye movements and using it to develop revolutionary UIs. However, there are still a few barriers which do not allow the technology to be used effectively. Google Glass helped the technology, but it’s not the vehicle to make it work in the intended way.

Why bother pressing buttons and using joysticks to control and operate your computer when you can do the same by just using your brain? It might sound a little sci-fi, but it’s possible. The advancement of electroencephalography (EEG) technology has led us to use neuro-feedback to control a variety of electronic devices such as robotic arms and prosthetic limbs. With Brain-Computer Interface (BCI), you can even move your computer’s cursor.

If you look back in the history, you will see that every time a new mode of communication – like languages, words, prints, the telephone, and the internet – was invented, the minds of people were flooded with thousands of ideas and endless opportunities surfaced. These opportunities led to the formation of new communities and industries. With the advancements in the UIs, we can predict a massive technological evolution in the next decade. It would be a major quantum leap for interconnectivity and communication with the potential to change the meaning of being a human!

Are you finding it harder to locate the good technical and IT talent? Many companies find them selves in the same situation. There are some better ways to locate and attract the right it and technical people to your company. Contact us to learn more.
By Decide Consulting|July 27th, 2018|IT Recruiting, Thought Leaders|0 Comments