These 5 IT Hires Can Cost You an Extra Million 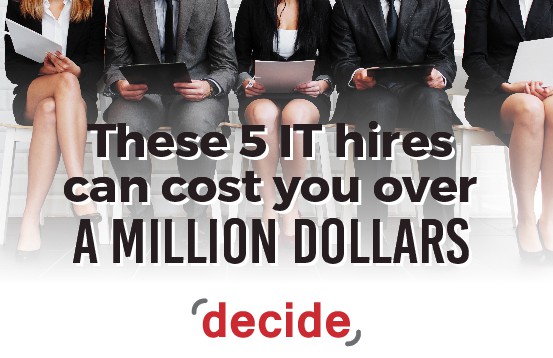 We all know the cost of a bad hire can be high. When you have been on enough software development teams, you have seen the good and the bad. When you start seeing, and recognizing, the good that can turn bad – that is when you know you are experienced. There are 5 types of IT individuals we have seen show up in different organizations. They can appear to be knowledgeable and productive, but they are a wolf in sheep’s clothing.  Having one of these can cost your organization huge dollars. When one adds up the person’s time, the time of individuals they work with, cost of fixing bugs they create and redoing work they created, it can easily cost over $1,000,000 to have a person like this in your organization. When you are interviewing, think about these five profiles and consider if the individual matches one of them.

Read More: Top 5 IT Cyber Security Certifications with the Greatest ROI >>
Read More: How Employers Plan to Deal With the IT Skills Gap? >>
Read More: Why Do IT and Tech People Cost So Much? >>
Read More: 5 questions to Identity a Software Team Player >>

Let’s say your company has software written in C#, ASP.NET, MVC and Bootstrap. You need to add new forms to it for some new functionality. A developer begins advocating using Polymer JavaScript. Maybe there really is a good reason for this, but the developer may be using your project their own personal tech sandbox. Newer technologies have their place. They need to be used when it is pre-determined to be a good time and place to use them. Not when a developer wants to add a technology on their resume for the next job. Don’t make your software more difficult to maintain just because a developer wants to play with t anew toy.

They never saw a piece of code they liked except what they wrote themselves. If you haven’t read the same books, articles and journals as the Rewriter, you are doing it wrong. Every time they open an existing piece of software, they declare “we need to rewrite this.” If your software works and isn’t causing problems, be very careful about investing in a rewrite of it just because it’s more than five years old. Plenty of mature software packages still work just fine. We have yet to see a company with enough resources to rewrite their software every few years.

Competence without comprehension. They can accomplish a task, but you must tell them exactly what to do. Exactly

what to do. Having them figure out something on their own will just not happen. They may understand the programming language at an academic level, but translating that into solving a business problem is beyond them.

There is an economics concept called utility. It symbolizes the value of things. An ounce of dark chocolate has greater utility to me than an ounce of white chocolate. Some IT people provide greater utility than others. Some even drain the utility. A developer who constantly needs help, participates in non-work and is slow to deliver can cost you more than just their time. If they produce very little and take time from the high performing team members, your project can actually loose productivity every hour they work.

Often the best experienced and most knowledgeable. They can be good, but must be controlled. Two Alpha programmers architecting a solution could cost you thousands of dollars just because they want to see who has the longer code. The difference between a really good developer and an Alpha Programmer is ego. When the ego is too big, it becomes more important to them to keep it big than your project. You do not want your project to suffer just because someone is super smart and needs therapy.

In a conversation with a $50M/yr. software company owner, he asked my advice on what to do about a developer. Several of his team mem 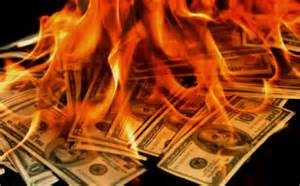 bers encouraged him to hire a certain Alpha Programmer (AP) because “he was brilliant”. They hired him. It wasn’t long before he used his overwhelming tech knowledge to build support to “re-architect the software suite”. What started out as a 6 month trial with just him working on it, turned into an 18 month ordeal. The AP grabbed three other programmers to work on his re-architecture, he disrupted and delayed other software products, bogged down QA and frustrated release management.

The company was beginning to revolve their software release cycle around the re-architecting effort. The customers who thought everything worked just fine but wanted some additional functionality for their changing business began to voice their opinion… by switching to the competitors. Customers don’t really care about the elegance of how your APIs are written. It works for them or it doesn’t.

The software company fired the AP and abandoned the overreaching re-architecting effort.  When he figured the total cost of the AP and the time of everyone else involved, it was clearly over $1M.

These people are hard to spot. If you find someone in your organization that fits one of these profiles, take steps to manage them more effectively and put up some boundaries.

The trait that is easier to spot is the problem solver. An IT worker with good problem soling skills is invaluable to any technical department. This is who you want to find.

By Decide Consulting|March 28th, 2017|Better IT Hiring, IT Recruiting, IT Staffing|0 Comments