How to know if a Corporate Culture is right for you 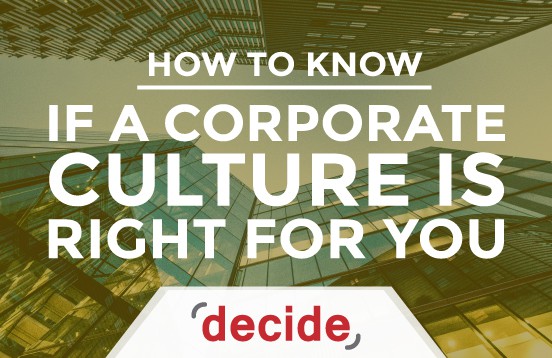 If you’re being hired for a position or even if you’re interested in a position at a tech firm, you should evaluate their corporate culture. You need to know if a company’s corporate culture is right for you before taking a job. Corporate culture has a lot to do with the company’s philosophy and worldview. Most companies put flowery words and paint vistas of progress and ingenuity, however, their actions, controversies and milestones speak louder than words.

The Décor of the Office Space

Office spaces usually say a lot about an organization. Most office buildings are cold and soulless. However, some spaces have pictures and posters lined up on their walls. Some even feature statues and small bobble heads. This doesn’t just serve an aesthetic or cosmetic purpose; it shows that the organization wants to liven up the atmosphere.

If an office space is too plain and bland, gloomy and dim however, you can probably surmise that you won’t like it there. It’s ok to be business oriented and adopt a no-nonsense attitude, but some organizations simply value productivity over the individual’s creativity or potential. That’s not the kind of company you want to attach yourself to.

A company usually puts its best foot forward and shows itself to be nothing less than perfect on its own website. However, you can usually get a sense of what their philosophy is by looking at their mission statement and about section.

It also doesn’t hurt to look at their employee section and achievements tabs to see what they consider achievements. Usually, a company’s philosophy and outlook on business can be surmised. It’s subtle, and you’ll probably have to go through a lot of the website, but you can usually get a beat on what they believe.

What does the News and Social Media say?

Social media and the news make sure that nothing stays hidden. So many skeletons in the closets of companies have been exposed through the last decade. Apple’s FoxConn controversy, Amazon’s European warehouses controversy, Uber’s harassment controversy, and Facebook’s Cambridge Analytica Scandal have all shown people that these tech companies put profits before people.

If you are going to work for a tech company, chances are that you can find a pretty good picture of what their work culture is like and what they value just by reading the news and searching around on social media. Even company reviews and customer experience ratings can show you how good a company is or is not.

How are the People Dressed? How do they look?

The way an organization enforces a dress code speaks volumes about its philosophy. Organizations with a strict adherence to traditional attire such as ties and pantyhose, may be extremely traditionalist and a stickler for the rules. However, those that don’t have a dress code and leave people to look however they want don’t necessarily have the best track record either. If the dress code is business casual, that’s mostly a good bet.

You also need to look at how the people around the office are behaving. If an intern or a new recruit is pacing and looks worried, that’s completely normal, everyone goes through the grind. However, if you begin to notice a pattern of general unhappiness around the office, or that people in senior positions are also as worried and uptight as the new recruit, you can be sure that the work routine is merciless.

Is there food around? Are there Vending Machines? Coffee Trays?

Hewlett Packard had a tradition in the early days of the computer era, to bring out Coffee and Donuts for their employees. It was considered a way to show them that they were valued and that they were the lifeblood of the organization.

Similarly, tech companies who value their employees take care of their needs such as snacks and food and coffee etc. Many people can’t function without coffee and can’t start the day without a bagel or muffin. If the company takes that in to account, it shows that they truly care about their employees.

Question the Employers Yourself

If you ask the employers about the company, you’ll probably get a feel of what their core values are. It’s common courtesy in interviews today for the interviewer to ask you if there is something you want to ask them. You can ask them what the employees think about working at the company and how the people are around. You can ask how the work hours rotate around to get an idea if the people are workaholics and competitive.

You can also ask them what they wish they knew before coming here. This will give you an insight in to what the workplace is like and if it demands you to be a warrior or if it is accommodating.

You can also ask bluntly if they stick to their core values. But don’t just ask a vague question and leave it open to interpretation. Quote a core value from their website or blog or ad, and ask the interviewer if the company has done something recently or in the recent past that demonstrates an adherence to that core value. If the interviewer takes too long to answer or can’t come up with an answer that sufficiently satisfies you, you should know that the company only has that core value up for show.

Do your research, as questions and then make an informed choice. This is your career on the line. Jobs are a dime a dozen, but ask yourself if you would rather work at a place that pays well, or values you more?