Why it is a Great Time to Major in Computer Science 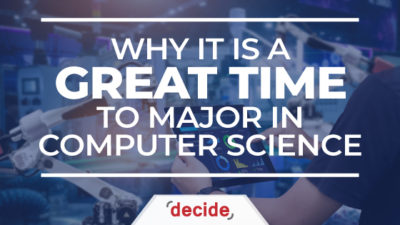 “Newly-minted graduates are getting job offers up to $500K.”  Anytime you want to get a room full of college students to perk up and say “Wow!”, just make that statement. (FYI – It works for the Gen X and Boomer crowds also.) Regardless, there is a population of people with new post-graduate degrees who never worked that are earning up to $500K a year. The jobs come with perks and bonuses. It is a small group. Odds are if you are reading this, you are not in it that population. That’s still OK, because for every job paying $500K for a specialized skill set, there are more paying $250K, or $125K. There are a ton of companies paying those same graduates $80K with no experience. What’s the common factor? They are computer science majors.

IT and Software Talent Today

We will circle back around to the $500K salary soon. Let’s dig into the state of the Information Technology and Software markets. Here are a few factoids:

My company started making a prediction in 2017. We predicted the number of IT and Software jobs will double by 2027. So far, the numbers are in favor of the prediction coming true.

Why the Current Demand for Tech People?

Look around. The entire digital economy created thousands of jobs. Here is a sample of now common IT and software jobs we hardly knew of, or didn’t exist, 10 years ago:

A quick search on Dice.com or Indeed shows hundreds of new jobs like these showing up daily.

Some very astute companies are being caught off-guard by the current demand for tech people. One of our clients is a Houston-based software company that employs about 250 people. Just over half of those classify as IT or software people. This is a company routinely recognized as one of Houston’s “Best Places to Work”. They have lots of perks such as yoga classes at lunch and allowing people to bring their dogs to work. They are intentional about bringing a Silicon Valley culture to Texas. It is the kind of place people want to work at.

For years, they brought a group of college interns in every summer. The ones they liked, they made full-time offers to. And for years, 95% of the interns they made an offer to, accepted it. The ones that didn’t take the offer typically had some extenuating circumstance.

Suddenly in 2018, not even one of their interns accepted their offer. These were not bad offers. They were offering up to the high $60s in salary. Not bad for a recent college graduate. The interns accepted offers $15K – $25K higher from Fortune 500 companies.

When all the Fortune 500 companies are going through some version of a Digital Transformation, there is a run on the market for technical talent. It is easier and cheaper for many companies to recruit that technical talent from colleges and universities than from the open market.

AI and Machine Learning are creeping into companies right now. Most companies are doing the equivalent of “Hello World” applications for AI/ML. It will not be long before executives see the benefits, and start implementing corporate strategies based on AI/ML applications.

“You will be working with Artificial Intelligence programs, running on a Quantum Computer that access data from 5G, or 6G, networks. Let that soak in. “

The Digital Economy (think Uber, Airbnb and social media influencers) does not exists without a 4G cellular network. The data requirements do not work on a 3G network. 5G is going to be 40 – 100x faster than our current 4G networks. Every app on your phone and customer facing website will be redone for 5G. All the current JavaScript-based libraries that give you that great user experience on your phone (Angular, React, Node, etc..) are tossed out the window in a 5G world. They are all based on a current bandwidth and latency expectations. Change those expectations, change the code base. Those JavaScript libraries won’t go away, but Angular V27 will be radically different. Similarly, our network and infrastructure requirements in a 5G world look very different.

Google recently declared a milestone in Quantum Computing. Google states that its Quantum Computing processor was able to perform a calculation in 200 seconds that would have taken the world’s most powerful supercomputer 10,000 years. Some relate it to the Wright Brothers plane at Kitty Hawk. Others discount whether it happened or not. Regardless, Quantum Computing is on the visible horizon. QC doesn’t get expressed as 50x or 100x faster. It gets expressed as exponentially faster. Currently we are still computing with 1s and 0s. Quantum Computing effectively processes with everything in between.

Here is a mind-blowing concept. If you are college-age, this will happen in your lifetime.  You will be working with Artificial Intelligence programs, running on a Quantum Computer that access data from 5G, or 6G, networks. Let that soak in. I cannot begin to explain how that will look.

In 2018, the New York Times reported that newly minted PhDs in Computer Science, from some of the top schools in the country are getting offers up to $500K in Silicon Valley. These graduates focused their studies on Artificial Intelligence or Machine Learning. As of 2019, there were about 15 universities that can produce the type of AI/ML candidate capable of commanding those salaries. The list is growing.

In 2104, Google bought the company DeepMind for $650M. This is the company that developed the AI that went on to beat the world’s best Go player in 2017. This was featured in the Netflix documentary AlphaGo. When Google bought DeepMind, there were around 50 people working there. From one point-of-view, Google paid $13M for each person. When you look at it like that, $500K is a discount.

Silicon Valley, and its competitors, will continually grab the top technical talent produced by the top universities. As more universities expand their graduate pipeline in Computer Science. MIS and Data Analytics, there is no shortage from the non-Silicon Valley companies looking to hire them.

What if you are not in Computer Science?

There are plenty of recent graduates who wish they had majored in Computer Science or at least took more technology classes. Going back for another undergrad degree is not always your best option. There are coding and technology bootcamps popping up all over the place. Some are private institutions. Many are associated with universities like the University of Texas or Georgia Tech. It is common to see 12-24-week programs that cost around $12K to enroll.

These bootcamps are a great thing for the technology marketplace. Many employers like these bootcamp graduates. The candidates are already degreed, have a couple of years work experience and are hungry for a career change. Who wouldn’t want to hire that person?

Not all bootcamps are created equal. Some are scams. Getting good data on how many people get jobs coming out of these bootcamps is difficult. There is a lot of fudging of numbers. A franchise in one city is great but not so hot in another. University-based bootcamps seem like the safer bet from the employer’s point-of-view.

We recently placed one bootcamp graduate at a company that described her as “the best hire they ever made”. She had some work experience in a non-IT field. Next she then went to a 24-week private programming bootcamp. She did some volunteer programming for a month before she got the offer. The company originally wanted someone with 3-5 years of programming experience.  She emphasized her drive and work ethic in the interview. They wound up offering her $25K less than they were expecting the 3-5-year person to cost. For her it was a raise over her previous non-IT job. She will adjust her career and salary expectations within a couple of years. The company that hired her will have to pay or lose her. In the meantime, everybody wins.

AI and the Workforce

Robotics have already had an impact on the blue-collar workforce. AI will have its impact on the white-collar workforce. Any type of “knowledge based” work has the potential to be disrupted. There are many parents advising their kids to pick majors that lead to todays’ knowledge jobs. Those jobs will not be around for long. It is the equivalent of a parent asking a kid to take over a travel agency in the 1990s. It was good for a while, but not anymore.

So, what are the “knowledge based” jobs? Accounting, Logistics, Supply Chain, Legal and Scheduling to start with. Not all jobs in these fields will be gone. These will just have the highest disruption rate. We have all heard reports of the manufacturing plant that used to employ 500 people and now does higher production with 50 people. That Fortune 500 accounting department will experience the same.

People with the computer science degrees are not going to be disrupted. They will be part of the disruption.

I have two kids in college. I want them to have the best career opportunities and options possible. There is a fine line between my nudging them while letting them explore what field of study interests them. One is taking some programming classes. The other is in another STEM major. I sleep better knowing this.

Technology has always disrupted the economy and the workforce. During the next 10 -20 years, the disruption rate will increase dramatically. Today’s college student cannot limit themselves to an older generation’s experiences. A good career choice that a Boomer made 35 years ago may not be a good one today. Computer Science and STEM programs are good choices if career options are what you value.

David Moise is a former software developer who started Decide Consulting. Decide Consulting is a Houston-based IT and Software Recruiting firm. Decide’s clients appreciate the unique perspective and proprietary tools Mr. Moise and Decide bring to the table. There are few companies that combine the technical expertise, market insights and recruiting capability like Decide.