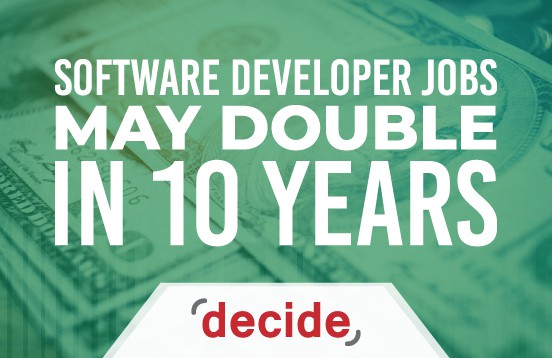 In 2008, the Bureau of Labor Statistics reported there were 1,336,300 software development jobs in the US.

In other words, the conservative Department of Labor said we would double the number software development jobs in 10 years. It only took 8 years to double. We got to the projected number 2 years early. Keep in mind, in 2008, the iPhone had just come out. The app store was nothing like it is now.

These numbers are using a couple of very specific BLS job titles. (e.g. Computer software engineers, applications) There are many other BLS job categories we could add (e.g. Database administrators, Network systems analysts,…) that can make the numbers even bigger. For every software developer, there are at least two more IT people employed.

We recently had an entry where we mentioned the current BLS software developer job count was 1.7M with 250,000 openings.

What is going to make the Software Developer Jobs Grow?

Here are several factors that may cause the number of software developer jobs to double in ten years: 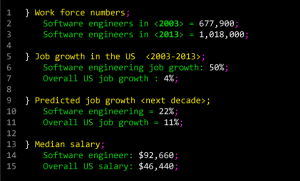 The BLS does their forecast based on past data. The curious thing about these software development jobs is most will be focused on hardware and technology devices that do not exist yet.

In the next ten years, we can easily have 3.4M software developers with another 5M other IT jobs surrounding them.